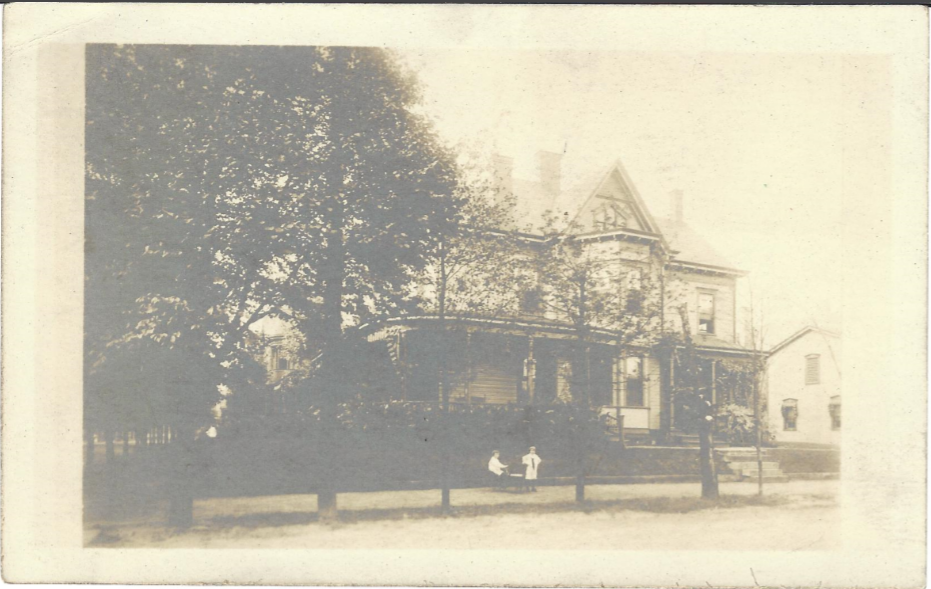 These unmarked photos feature the front and side views of a beautiful Queen Anne Victorian home situated on a corner lot with two children at play on a riding toy on the sidewalk and lawn.

Even though the photos are unmarked, there are a few ways that we can date the photos. We’ll start with the content of the photos:

Some architectural research tells me the home is a Queen Anne Victorian which was popular between 1880-1910. (Check out the rounded turret on the back corner of the house in the photo below!) The established landscaping gives the feeling that this house had been around for a while. The children are playing on a riding toy, perhaps a pedal car which were introduced ~1890s. They are also wearing white rompers/playsuits which were introduced in the early 1900s, so we can establish that the photo was taken no earlier than 1880 by the style of the house, but was most likely in the early 1900’s by the children’s outfits.

If we flip the photos over we can see that they were printed on postcards, which were known as real photo postcards (RPPC). Kodak introduced a camera that would allow users to create their own postcards in 1903 – the beginning of the RPPC period. The back of the postcard is undivided (meaning there is no dividing line between message and address), and undivided postcards were printed exclusively between 1901-1907. The back of our real photo postcard is what really narrows down the time period between 1903 and 1907.

I would love to know where this house is located and if it is still standing. Any other historic home buffs out there who would also like to see the inside? 🙂