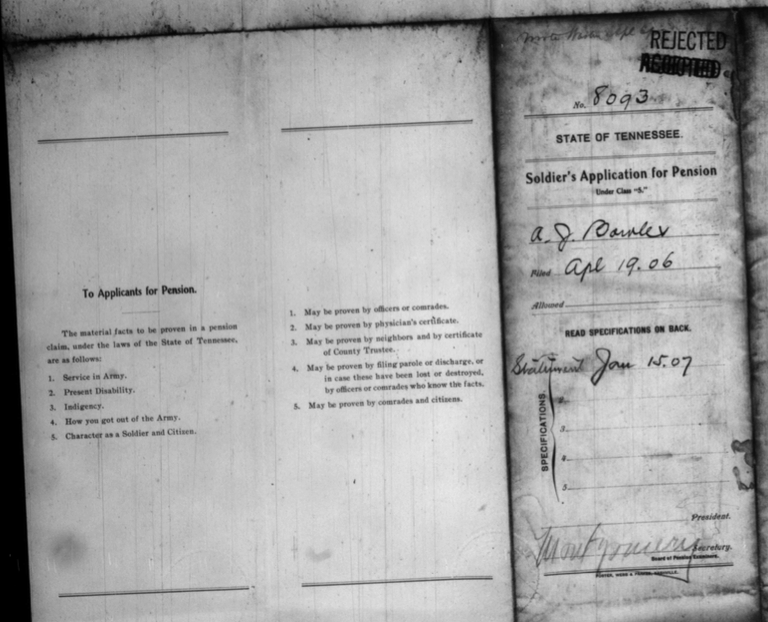 Did you know that there is a wealth of information hidden in Civil War pension records?

I certainly didn’t until recently, when these records helped me to begin knocking down a long-standing brick wall in my own family’s genealogy. I thought that the information gained wouldn’t extend beyond an acknowledgement of service and a pay stub, but the reality is that pension records can provide pages of detailed information on the veteran’s service, origins, and family.

There were generally two types of Confederate pensions that could be applied for: the soldier’s or veteran’s pension, applied for by the veteran, and the widow’s pension, which was applied for by the widow upon the veteran’s death (Arkansas also offered a mother’s pension). There were four types of Union pensions: veteran, widow, minor, and dependent parents (you can read more about those from the National Archives link below). Each State had different rules and dates for applying for and receiving a pension, many included rules regarding specific war-related injuries, so not all soldiers have a record – but the ones who did may have left you some key information or rich detail for your family history.

One of my second great-grandfathers has long been a sizable brick wall in my family tree. He has been nearly impossible to find before 1885, and over five decades of his life have gone unaccounted for. He passed away before any of his great-grandchildren, including my grandmother, were born, so the only information passed down were these five things:

That isn’t much to go on… until I found his pension application. Right there in the middle of the first page, I found a single sentence of information that equates to swinging a sledgehammer at the middle of my wall.. Where were you born? Beneath it A.J. wrote “in Franklin co Virginia in year 1833.” There are ninety-five counties in the Commonwealth of Virginia, and now I know exactly where to search!

He then goes on to detail his enlistment, his commanding officers, and his presence at the First Battle of Manassas. In answer to later questions, he stated that he was a share farmer living with his wife and child, making a scant living, and that he had only been a resident of Tennessee for twenty years at the time of his application.

The details in this file have given me facts to add to the family story, new avenues to search, and has allowed me to uncover his service records (available from Fold3), an early marriage and census record in Virginia… and slowly, this wall will come down brick by brick!

The index to the Confederate Pension records is available online, and I am currently offering to search through and provide pensions applied for by residents of Tennessee at the Tennessee State Library and Archives. Email us at: contact@jwendellresearch.com for details.

Edit: When this post was first published, I erroneously said that there were only two types of pensions. There were two types for Confederate soldiers, and four types for Union soldiers.