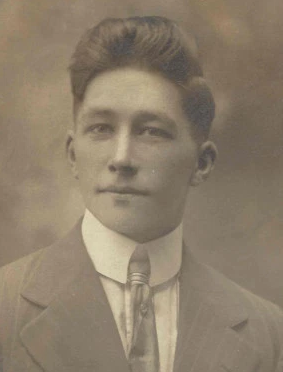 Today’s post is the last in a series of five family photos featured over the last few days. Herman Roy Densberger was the son of Mary Stineman Moser Densberger and Henry John Moser.

Photos of his brother, Charles, his half-brother, Harry S. Moser, and Harry’s wife, Celia, have been posted over the past few days.

Herman was born September 6, 1895 in Pennsylvania. We find him registering for the World War Draft on June 5, 1917, where he stated that he is single. He married Penina B. Robinson on March 9, 1918. On June 28, 1918 he is enlisted in the Army. Sadly, we find that Herman passed away on October 13, 1918 from Spanish flu, leaving a young widow and infant son behind.

Penina passed away in 1963 and is buried next to her husband at the Odd Fellows Cemetery, Danville, Montour, Pennsylvania.