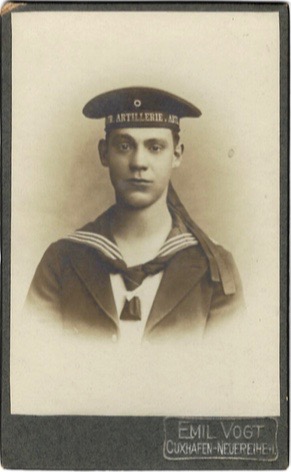 These two photos caught my eye at an antique store in Newburgh, Indiana (Country Gentleman Antiques), and they were so striking that they had to come home with me. My initial impression was that the uniforms were naval, and the spelling of “Artillerie” was French, but the store owner recalled that the family he bought these from mentioned these two portrait subjects being Austrian and also that they’d stayed in touch over the years. During the late 1800’s and early 1900’s a large portion of the ethnic makeup of Evansville (which neighbors Newburgh) were German immigrants fleeing Europe, so it’s plausible that these young men had close familial connections to southern Indiana.

I began my research with the photographer, Emil Vogt. The Museum of Fine Arts – Houston, Texas has a collage of German Military Personnel taken by Vogt in 1912 (here), and describe Vogt as a local portrait photographer in the North Sea port town of Cuxhaven, Germany. The small rendering of that collage shows uniforms similar to those above. I also found that the German spelling of artillery is also “artillerie” as shown on their hats, suggesting that these two young gentlemen were a part of Germany’s Navy. Initially, I assumed that the small numbers 36 & 41 at the end of the photographer’s mark were years, but I quickly realized that couldn’t be right because by the year 1936 the German Navy had already become the Nazi Kriegsmarine, and the uniforms were changed to reflect that regime. Instead, these uniforms are those of German sailors from the World War I era of the Imperial German Navy (1871-1918) and possibly its successor, the Reichsmarine (1919-1935) – pinpointing a more exact date has been difficult.