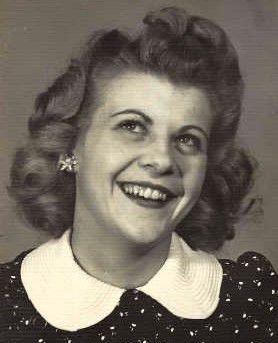 Happy Go Lucky is exactly how I picture Irene. I think her laugh was as big as her smile and that she had the ability to make people happy when around her.

Irene was born June 1, 1925 to Clement Charles Rebb and Natalie Ethyl Russell. “Clem” and Natalie were both from Winnapeg, Manitoba, Canada and were married October 17, 1924 in Detroit. Clem worked as a manager at the Detroit Creamery Company.

Irene attended Cooley High School and was active in drama and music. She graduated from Cooley in January 1943 and went on to attend Wayne State University. By 1950-51 Clem and Natalie are divorced. Natalie and Irene moved to Phoenix, Arizona. Clem married Grace Rands on December 19, 1952, in Detroit. After Grace passed away, Clem relocated to Phoenix as well.

Richard began a career as a draftsman at Lescher & Mahoney in the late 1940s and continued there until the mid-1950s, before moving to F R Fazio as an architect.

Richard passed away in 2002. No other information on Irene has been found at the time of this post.