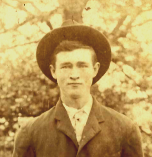 I am always thrilled when I find a photograph with some type of identification markings. This particular photograph of Jimmie Boyles was purchased in an antique shop in Texas a few years ago. I had to buy it. I just couldn’t resist. I hope that some of Jimmie’s family will eventually find this post and I can return this photo to his family.

Written on back of photo: Jimmie Boyles married Mamie Loden / our cousin on Mother’s side

Jimmie Boyles was born James Edward Boyles on October 16, 1886 in Fruitvale, Van Zandt, Texas. He was the son of Melvin Boyles and Eliza C Hopper. According to the 1910 US Federal Census he was single and living with his widowed mother near Mills Point and Grand Saline Road, Van Zandt, Texas. They both were listed as farmers.

James filled out the World War I Draft Registration card on June 5, 1917. He was living in Fruitvale, Texas, and was self-employed as a farmer. He listed his wife, child, and mother as his dependents. He also stated that his invalid mother, and dependent wife and child were reasons to be exempted from the draft. His physical description states that he was of medium height and build, with blue eyes and dark brown hair.

By 1920, the US Federal Census shows that Jimmie was still farming and that he and Mamie have a  4 year-old daughter, Jarreline, and a 1-year-old son, Melvin. Jimmie’s mother, Eliza (Lizzie), is living with them. It appears they named their son after a grandfather he would never know.

Find A Grave records indicate that a son, James F. Boyles, was born on November 25, 1923 to James and Mamie. Sadly he passed away on December 2, 1923. He was laid to rest in Creagleville Cemetery, Fruitvale, Van Zandt, Texas.

The 1930 US Federal Census reveals a career change had taken place for James. He was now listed as being a retail merchant of gas and oil. Located directly above James and Mamie’s entry on the census record was Tom Loden, Mamie’s father.  Tom was a retail merchant of groceries. Jarreline I. was 15 years old, and brother, Melvin T., was 11.. James’ mother, Eliza C. was now 65 years of age.

The 1940 US Federal Census gives us the last good look at the Boyles family. James and Mamie were back to being listed as farmers. The only other person listed in their household was a cousin to the head of household, J.W. Mercer.

The next record available is James’ Death Certificate. He was retired from farming and living in Grand Saline, Van Zandt, Texas. He passed away on January 4, 1964 at the age of 77.  He was laid to rest in Creagleville Cemetery, Fruitvale, Van Zandt, Texas.