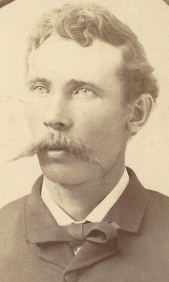 I love when photographs have personal details written on them. This photo gave me enough information to generate a good bit of John’s genealogy. Hopefully someone in his family will be able to claim the photo.

John was born in March of 1858 in Denmark. It is unclear exactly when he entered the United States, as various records have it anywhere from 1872 to 1880. He married Nellie B. [?] in 1890 and they had one daughter, Luella, in April 1892. No other children are recorded in any of the US Census records. Both John and Nellie appear in the 1940 US Census record. John is 82 and Nellie is 71. No other records are found for them at this point.

Their daughter however, can be traced much further. Luella G Madison married Floyd Henry Eastman on January 2, 1910 in Brown, South Dakota. Floyd was born in New York, the son of Burton and Clara Eastman. The family moved to South Dakota in 1899 and were listed as farming in the 1900 Census record. HOWEVER, the 1910 Census record had Floyd listed as a lodger with Henry Nelson, single, and working as a mail carrier. While Luella is listed with her parents as single for the same year. The US Census was taken May 2, 1910. Hmmm …. Did they marry and keep it secret? Or is the date recorded incorrectly?

Floyd and Luella had four children: Nellie, Ethel, Warren, and Calvin. They lived in South Dakota into the 1940s. A 1950 City Directory showed them living in Buffalo, New York. Luella died in 1950 and Floyd died in 1966. They are buried in Ball Hill Cemetery, Forrestville, New York.