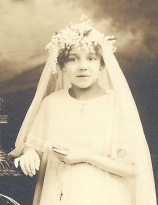 Kinga Grzywacz was born in 1916, the daughter of Steven Grzywacz and Constancia Jurkiewicz.

According to the 1920 US Census the family is living at 286 Canfield Avenue, East in Detroit, Michigan. Kinga is the youngest of the children at that time. Her siblings include: Thomas, Alexander, Katherine, Kristian, and Eleanor. Her father, Steven, is a tester in a car factory.

By 1930 the family is living at 2693 Illinois Avenue in Detroit. Steven owns his own home and is working as a sprayer in an auto factory. Kinga now has two younger siblings as well: Frank and Clemens.

On February 1, 1936, at the age of 19, Kinga marries Bruno Jaworski. The 1940 Census shows Bruno, Kinga, and their children: Cecelia, Ronald, and Paul, living with Kinga’s parents at their home (2693 Illinois Avenue). Kinga’s siblings: Frank, Clemens, and Sylvester are also living in the home. Her father is working at a Garage Service Station as a mechanic (radiator repairs); while husband, Bruno, is a musician working with the Concert Band Project.

I would love to see this picture returned to relatives of Kinga.