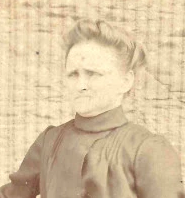 Today’s photo features Mary Alice Stineman Moser Densberger, the mother of Harry S. Moser and Charles Densberger. Mary’s first husband, David Moser, died when Harry was very young (before 1894). She then married Henry John Densberger and had two more sons: Herman and Charles. They are listed in the 1900 United States Federal Census as a family. Henry John passed away in 1907, leaving a widow and young sons. Mary Alice died in 1919.