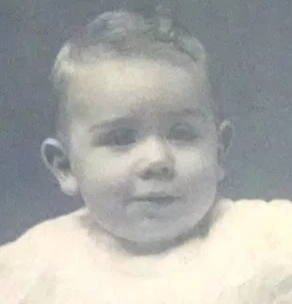 Written on the back of this sweet baby photo is the following:

Given the history on Mrs. Harry [Eva] Stone, I can’t help but wonder if this is a photo of her son, Charles, that was reprinted on 1/14/20.

Eva was born in June of 1887 to Charles N and Sarah M Cole in Wisconsin. She is listed in the 1900 census with her parents and two brothers, William and Clayton. By 1910 Eva is married to Harry Stone (a miller in a flour mill) and living in Star Prairie, St Croix, Wisconsin. The census record indicates that they have been married 7/12 as of the date of the census. This would put them marrying around October of 1909.

Harry’s 1917 Draft Registration card tell us that he was still working as a miller and had a wife and child as dependents. He was born in Star Prairie, St Croix, Wisconsin. The 1920 Census shows Harry, Eva, their son Charles, and Harry’s brother, Jeff A Stone, living together in Richmond, St Croix, Wisconsin.

By 1930 Harry is a dealer of automobiles. Harry, Eva, and Charles are living at 69 Pine Street, Glenwood City, St Croix, Wisconsin. In 1940 Harry and Eva are still at 69 Pine Street with Eva’s mother, Sarah Cole, and her brother, Clayton Cole. Harry is the proprietor of a tavern and Clayton is a mechanic.

Genevieve died July 29, 1997 and Charles died a a few weeks later on August 27, 1997. They were buried at St John the Baptist Catholic Cemetery in Glenwood City, St Croix, Wisconsin.