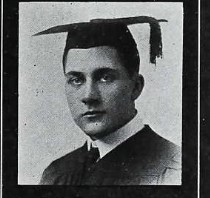 Winfield Eckley was the man who owned the two photographs featured in our “Corvallis, Oregon” post.

Winfield was born 13 January 1893 in Lagrande, Oregon.[1] He was the son of Edwin Eckley and Harriett Jane “Hattie” Proebstel.[2] He attended Oregon Agricultural College and appeared as a graduate in the school’s 1916 yearbook.[3]

When Winfield registered for the World War I Draft, he was employed as a student engineer at the General Electric Corporation in Schenectady, New York.[4] He claimed exemption from the draft as he was testing government work for General Electric.[5]

Winfield was enumerated in the 1920 US Federal census in Pittsfield, Berkshire, Massachusetts, where he was a lodger with the Lally family.[6] He was a salesman for the General Electric Corporation.[7]

The Eckley family lived in Tell City, Indiana for many years, where Pauline passed away in 1975 and Winfield in 1991.[9]