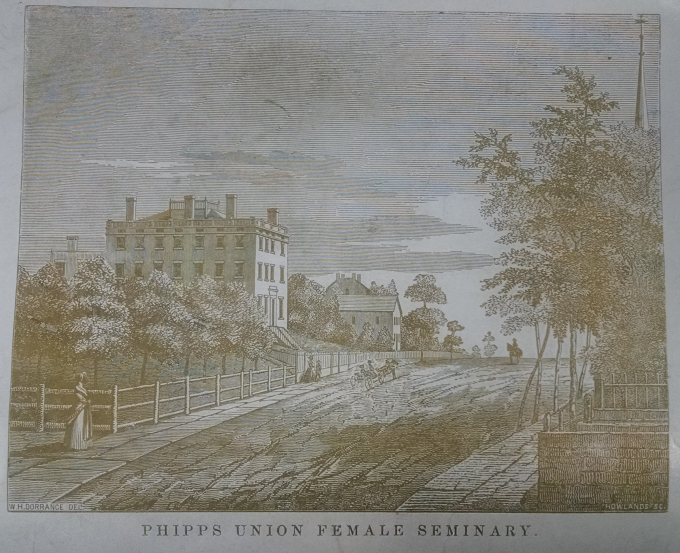 A few years back I discovered that my second great-grandmother, Jeanie Torrey Wendell, attended Phipps Union Seminary in Albion, New York. I had discovered an article in The Orleans Republican where Jeanie attended a school reunion in 1907 and gave a speech entitled “A Reminiscence of More than Half a Century Ago.” As I have come to learn, Jeanie was a writer, historian, philanthropist, active in the Louisa St. Clair Chapter of the Daughters of the American Revolution (of which she was a founding member), and an active member of the Mayflower Society  and the Colonial Dames.

But before she was all of those things, she was a little girl attending a new school of which her father was a charter contributor. The article spurred a long search for  more information about Phipps Union Seminary. Very little was discovered online, but after a trip to Albion, New York a few years ago, I discovered “gold” in the Hoag Library. There in the genealogy room was a box of items from the school, of which the local historian/genealogy room supervisor gladly shared. I was beyond thrilled to see a school publication from 1851 which contained Jeanie’s name as a member of the Junior class.

Over the next few posts I will be sharing more about Phipps Union Seminary, Jeanie’s memories about the school, her classmates, her teachers, and her desire for her daughters and grand-daughters to come.