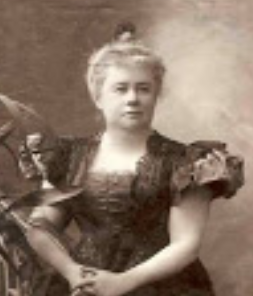 Today I am honored to shared the words that Jeanie shared at the 1907 Phipps Union Seminary Reunion in Albion, New York. The newspaper article from The Orleans Republican, (15 May 1907) was quite lengthy and shared the names of those in attendance, the program, officer elections, etc., along with Jeanie’s reflections.

The key points I take from my grandmother’s speech are that 1) mischief-making was clearly a trait that was handed down through the generations, 2) at some point we all recognize just how much we adored and/or revered certain educators in our lives, 3) experiences are shared across generations, and 4) my grandmother was thinking of and dreaming for me in 1907. (See the highlighted text at the end of her speech.)

A Reminiscence of More than Half a Century Ago.

Mrs. Jeanie Torrey Wendell, of Detroit, presented the following reminiscence. “In studying Italian, you will notice that among the first writing exercises which that pleasure-loving people give you is the proverb, “Ogni epoca ha le sue gioie e i suoi dolori,” by which they mean to say that every age has its own sorrows and its own pleasures. One distinct and vivid picture in the memories of my childhood is of a winter morning 68 years ago, when my mother wrapped me in my little crimson cloak and hood and my father drew me on my little sled over the snow to the Phipps Union Seminary, where he entered my name as a pupil in the primary department. My recollections do not go so far as to say that I was a very regular atttendant at that tender age, but I do know that most of my days during the next sixteen years were spent within that institution, where I suffered and enjoyed during two administrations, that of Miss Sophronia and later of Mrs. Achilles. The marriage of Miss Saphronia was the great event of the century to us. I only wish that they were both here to-day, that I might humbly beg their pardon for all the anxiety and annoyance I must have caused them, for, if my memory serves me rightly, and I fear it does, I was the ring-leader in most of the mischief concocted in that world within a world. And how much more real to us seemed every occurence than anything that happened in the outside world. Who is there who remembers the majestic tread of Miss Sophronia, and who that has trembled at the reproving voice of Mrs. Achilles and glowed with pleasure at her approving smile? And who remembers sweet, gentle Miss Pratt, and prim, patient Miss French? Especially, I recall her patience. And dear, enduring Mrs. Elisworth, our teacher in music, and Miss Ballard, who left the seminary to be married? What a wonderful and awe-inspiring thing it seemed to us! We all hoped she would not have any children, for how terrible it would be, we thought, to have a mother, who was also a teacher. I have to look back from a sane and appreciative standpoint and see what a blessing such a mother can be in a home. I hope all those dear dead women have forgiven us our intolerance and cruel thoughts of them, and that they know how we have lived to love and revere their memories. And now for the girls of my day. Alas, how few of them are left! I trust that some of them are here to-day that they may know while still in the flesh what one memory of them is. There were Ellen and Agnes Field, Emeline and Louisa Burrows, Elizabeth Burrows, Eliza Colgrove, Cynthia Lee, Laura Bumpus, Melissa Warner, Naomi Lattin, Mary Noble, Martha and Sarah Smith, Almira Morehouse, Sara Gere, Laura Jane Sickels, ?? and Sarah Butts. These were among those who were always held up to us as models of good behavior and studiousness. They were of Miss Sophronia’s day. Also Bell Treat, that silent, beautiful girl. I am sure that she and a later-day girl, Kate Meech, were accountable for some of our idleness – they were so beautiful that we neglected some of our duties to look at them. Then there was —-, I not will give you her name; she will recognize her portrait when I say it was she who always “told on us” – in the speech of the modern school girl, she “gave us away” – but Mary was a good girl and the teachers all loved her. The names and faces come thronging about me in such numbers that I could go on for hours and not give them all. During Mrs. Achilles’ reign there were Hattie Hutchinson, the handsome Rosenbury [Harriet & Henrietta] twins, Axie [Achsa] Webb, dear, demure little Axie. We called her Miss Prim. She could do no wrong, but she dearly loved to watch the others at it. Cornelia Goodrich, Nancy Tucker, Lydia and Marie Porter, Grace Bussey, Helen Hard, Eliza Bumpus, Jennie Lee, Nell [Ellen] Sipes, Nell [Ellen] Smith, Mary and Jane Spencer, Cornie Benjamin, Kate  Foster, Nettie Loder, Fanny Noble, Helen Mills, Nettie Noble, and one other I must mention to expose her, as she was my chief aider, abettor, and often my instigator to mischief, and you never would have dreamed it – the expression of her countenance was a sermon on good behavior. In the old days we called her “Hat” Noble. All these personal reminiscences are only incidents and give no idea of the dignity and worth of the splendid school and its fine corps of teachers, and I could wish no better, wiser future for my daughters and grand-daughters for ages to come, than that they might enjoy the blessing and privilege of being educated and fitted for the battle of life by just such teachers and in just such an institution as the grand, old Phipps Union Seminary.”