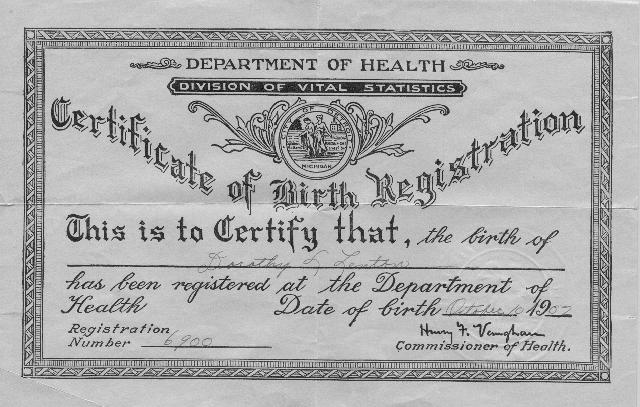 The Problem with Birth Records

As a genealogical researcher one of the most common sentences I hear is: “I need a birth record for my great-grand-so-and-so born in 17 or 18__.” I then have to break it gently that, although one of my greatest wishes is to make records magically appear, such a record has a higher probability of not existing than it does existing.

Here in the United States, it wasn’t until 1902 that the Government put a standardized system in place for registering births with government agencies, and birth registrations were not made compulsory until the years around 1910. Many of Canada’s provinces adopted compulsory registration practices in the late 1800’s, and in the United Kingdom registrations were collected by government agencies as early as 1837, but not made compulsory until 1875. However, that doesn’t mean that your ancestor’s birth wasn’t recorded before then.

Most early US births were recorded through local churches where many Ministers and Priests dutifully kept handwritten records for all of their parishioners. Sometimes we are fortunate to have those records published via the internet, local libraries and historical societies, and sometimes the church still has the records and the Church Historian or Secretary will kindly search them for you, but many (too many) of those church records have been lost to time and the elements.

Sometimes states and towns also took it upon themselves to record vital records before it was required – personally, a significant portion of my own family history is forever indebted to the meticulously transcribed Massachusetts Town Records (available through Ancestry) which recorded births, marriages, and deaths for many of my ancestors (although still not all) in the 17/1800’s.

Many times the geographical region in which your ancestor lived also plays a major role in the records available to you now – for instance, New England is much more documented than the South. New England is much older, of course, but it was also much more populated and documentation and preservation of daily life had more of a place in society. The South is much more rural. Life in the early South was about surviving, and most rural towns and buildings were just not build to last. The Civil War was also a large factor in the loss of records. Here in Tennessee we have what we call the “burned counties;” these are the counties whose courthouses were destroyed, often by fire, and with them all the records and any hope we have of further documenting our ancestors in those places.

The important take-away here, and the most solid advice I can give for those of you conducting your own research, is to really dig in and find out what is available to you in the places where your ancestors lived. Google really will be your best friend in the quest for finding your family. I also rely heavily on FamilySearch.org’s Family History Research Wiki, which will give an overview of records available by state, their various repositories, and the dates for those compulsory vital records registrations. Then make an effort to contact those libraries, societies, and churches – you’ll never know what’s there if you don’t ask! New records become widely available all the time, so keep checking back.

Your family history is never finished!