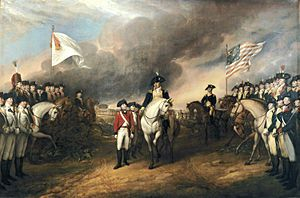 Today In History: Victory at Yorktown (1781)

“After a week of fighting, a young man in a red coat stands on a parapet. We lower our guns as he frantically waves a white handkerchief…”

– Yorktown (The World Turned Upside Down)
from Hamilton: An American Musical (2015)

While I could absolutely write about the genius of the musical Hamilton, or trap you in my car while I perform the entire musical as a one-woman company, I’ll only use one line that serves as a pivotal point in the musical, to reflect a pivotal point in American history – the surrender of around 8,000 British troops by General Lord Charles Cornwallis to General George Washington and his combined American and French forces at Yorktown, Virginia on October 19, 1781 – 236 years ago today!

General Washington had been, at that point, focusing efforts on reclaiming British-occupied New York City, where General Clinton was encamped with around 17,000 British forces (Washington had about 7,000). At the strong urging of French Commander, General Comte de Rochambeau, Washington formed a strategy to leave New York by fooling General Clinton into thinking he would be attacked, while the Continental & French Armies snuck away and moved south to where British General Cornwallis had entrenched his army of 9,000 at Yorktown, Virginia, and victory was far more likely.

The French Navy established a blockade on the Chesapeake Bay to prevent British aide from Clinton, and the French and American armies began the Siege on Yorktown, digging trenches and encircling the city and the British within it. Finally, on October 19th, in what was considered a great spectacle that stretched for more than a mile, Cornwallis surrendered by marching his troops out of Yorktown between two lines of Allied forces – the Americans lining the way on one side and the French on the other – and laid down their arms before marching back to Yorktown.

The victory at Yorktown wasn’t the official end to the American Revolutionary War, but effectively marked the end of fighting in the colonies and began the negotiations that would result in the Peace of Paris, and mark the beginning of the Unites States as an independent nation in September 1783.

For maps of the battle and other great information about the Battle of Yorktown, visit here: History of the Siege of Yorktown and Yorktown Campaign

Want to know if you had ancestors who were part of the American Revolution or present at Yorktown? Contact us through our Services page or by emailing ericka@jwendellresearch.com