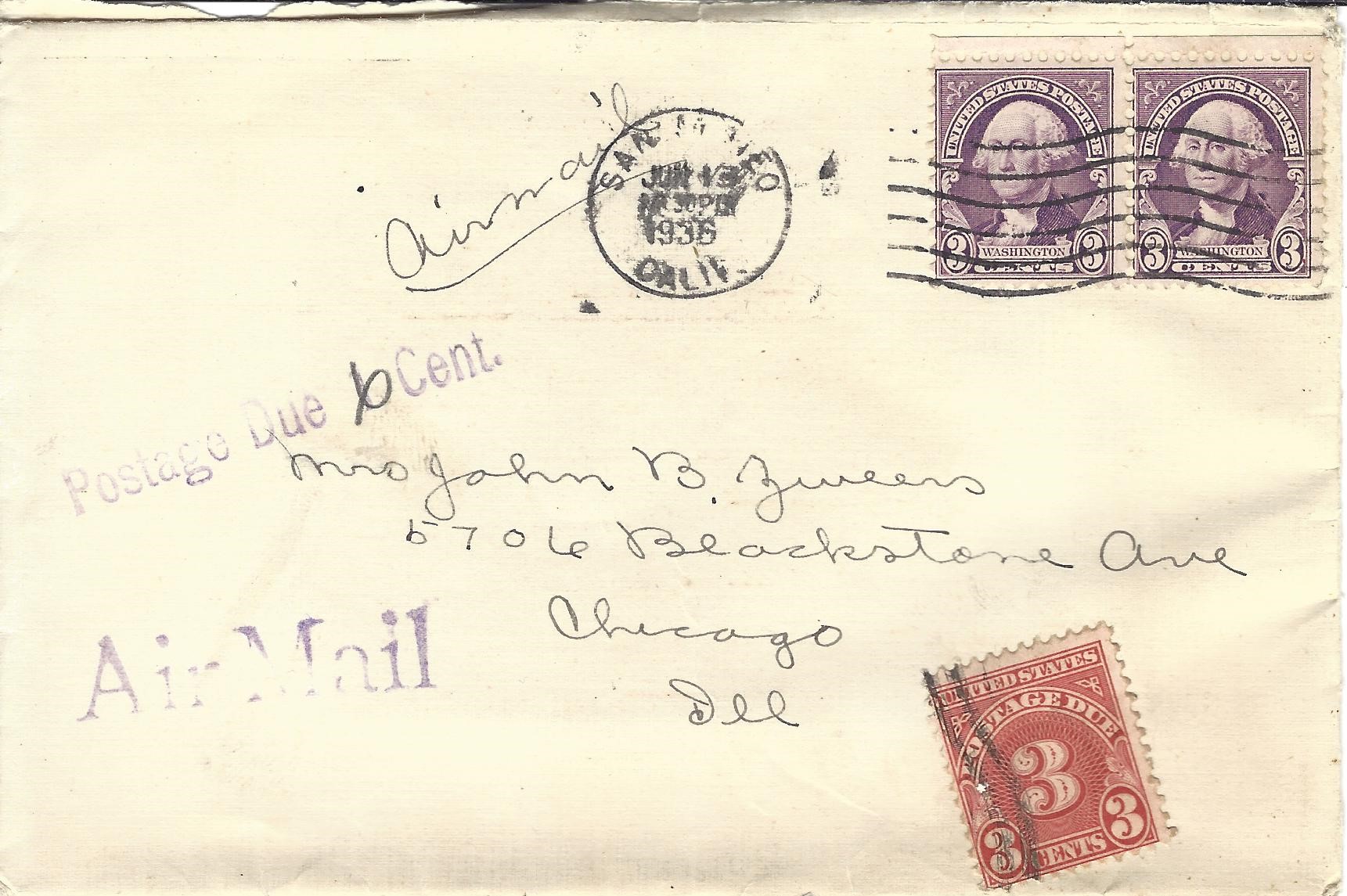 Uncle Orron & Aunt Kitty are the subject of this letter and two of the people in the accompanying photograph. This was a purchase from eBay (as I can’t let photographs or letters linger, if I can help it). I do not know any of the people mentioned.

The photograph appears almost to be a tintype, but it was taken in 1936 at the Fisherman’s Wharf in San Francisco, California. So I’m not sure exactly what to make of it.

Uncle Orron and Aunt Kitty were visiting family in San Mateo, California, and were taken on a whirlwind sightseeing tour by the writer of the letter. She simply signs her name “Queen.” The letter is addressed to Mrs. John B. Queen [Lorena] of 5706 Blackstone Avenue, Chicago, Illinois. The writer’s husband may be a man named David/Dave; as he is mentioned as entertaining Uncle Orron. Also a possible daughter, Anna, is mentioned. Of course, at this point, that is speculation. My genealogist heart is wanting to know who these people were and how they were connected.

I am sorry to be so late sending John his allowance. Here is a $100. Hope he will forgive me. Uncle Orron and Aunt Kitty were here three days. Sunday we got up rather late and visited and I took them on a short ride around San Mateo, etc. Monday we did San Francisco thoroughly even to Fisherman’s Wharf and Chinatown. I am enclosing a picture we had taken at the Wharf. Dave got one for them. Monday Dave spent the entire day with them. Tuesday I took them down to Palo Alto and San Jose and had lunch in a patio, saw Stanford, Junior League, Allied Arts (a beautiful old Spanish place, Sunnyvale hangar where the big dirigibles are housed and the Winchester Mystery house. We drove them in to S.F. after dinner. They were stopping to see Aunt Nellie in Salt Lake. Uncle Orron is quite garrulous and full of plans and politics. Aunt Kitty as nutty as ever. Bought some cheap candy twice about 15 cents worth, ate some and then gave it to Anna for a little present.

I just received a letter from them and will send them on to you next time I write. Aunt Kitty feels that Uncle Orron is so much older he must be senile and has a semi-tolerant attitude when he talks of things he is going to do. Dave enjoyed him and seemed to think his mind was remarkably clear and he is active like mother was. I asked him about the headstone and he said he always intended to have a nice monument on the family lot, but he said “I had a very extravagant family and the most he could get for myself was cigars and a movie.” Aunt Kitty said Mrs. Marsh was dead. Caroline and Ted still live in Leadville. I read recently it was a ghost town. Wonder why they are still there as Ted was supposed to be very brilliant.

I am hoping the stock market will boom and perhaps you can come out for a couple of months. Do you suppose so? We are all so anxious to have you.

The pets are all well. Betsy recovered from her vaccination and then Middy had an infection in his nose. Turned out to be a polypus so we had it removed and while under the ether I had the rest of his tooth extracted as it would decay in time. He is the best cat to do things for, and he was so glad to go home, threw himself on the car seat and rolled and “meowed” all the way home.

The draperies are all finished and at the cleaners. They will be back Tuesday so you should get them about next Friday. You did not say whether you could use the blue drapes anywhere.

The miniature was a surprise. I really can’t remember how I looked then. The snap was very poor we [illegible] that at that time. David said “Tell Lorena its worth nearer $5 than $25.” I used to wave my hair on curlers. How does it strike you? You are a better judge that I of such things. I am returning it dear.

How is Mama doing? I do hope there is still a possibility of your coming. Anna and I are living on that hope. Oceans of love to you and John.

P.S. What a move. I do hope things have smoothed out some and that you are going to like it there.

I have been trying to write this while Anna cleaned my room and I couldn’t keep her from bursting out in conversation every few minutes so feel quite giddy.

Scribbled across the top of the first page of the letter is a reference to the photograph she enclosed.

Aunt Kitty had no warm wrap so I gave her my furs to wear as it was cold in S.F.

It all of these we can pull out a few facts: