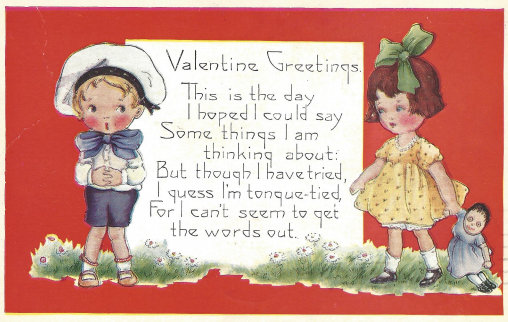 Miss Cecil (Cecile A) Cole was born on September 27, 1914, the daughter of Frank E and Hazel A Cole. She is listed in the 1920 US Census with her parents and her sister, Zera. They are living in Tompkins, Jackson, Michigan. The 1930 US Census shows Cecile and Zera, their parents, and Frank’s brother, Perry, living in Jackson, Jackson, Michigan.

The 1940 US Census shows Leland, Cecile, and their children, Patricia, Earl, and Gale.

Cecile died July 24, 1983 in Blackman, Jackson, Michigan, and is buried at Hillcrest Memorial Park in Jackson.

As for the sender of the Valentine Greeting, their are several Thane’s listed for Jackson County, Michigan. So, a little more detective work would need to be done to try and find a connection to Cecile.