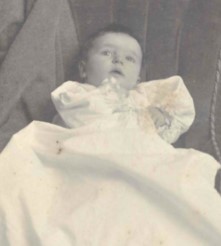 This photograph of Virginia Rhoads Brunner (age 8-weeks) was purchased at an antique store in Maryland. I purchased it because 1) I hate to see photographs be discarded, and 2) it had Virginia’s name on it. I had to see if I could learn more about Virginia.

Virginia Rhoads Brunner was born 23 February 1904 in Reading, Berks, Pennsylvania. She was the daughter of Herbert Rhoads Brunner and Anna Elizabeth Penman. Virginia was baptized in the Lutheran church on 3 July 1904. (1)

In the 1910 United States Census, Annie E. Brunner was enumerated in the household of her father, Robert Penman, in Mount Carmel, Northumberland, Pennsylvania. Included in the household were Annie and her two daughters: Virginia Rhoads (age 6-years), and Margaret Evelyn (age 3-years), and her siblings: James and Margaret Penman. Robert was born in Scotland and immigrated in 1855. He became a naturalized citizen. Annie indicated that she was married, but it is unclear why Herbert was not enumerated with the family.(2)

In 1920 the Brunner family was enumerated with Annie’s brother, Robert Penman, in Mount Carmel, Northumberland, Pennsylvania. Robert was a machinist in the mines. Herbert Brunner was a confectionery salesman. Virginia Rhoads was 15-years-of-age and Margaret Evelyn was 13-years-of-age.(3)

Virginia married Roy Cleaver. They were enumerated in the 1940 United States Census in Selinsgrove, Snyder, Pennsylvania, where they rented their home on West Mill Street. Roy was employed as an Adviser with the Department of Education. They had one son, Roy L. Cleaver, who was 5-years-of-age.(4)

I would love to see this photo returned to a family member of Virginia Rhoads Cleaver [nee Brunner]. If you are a relative, please contact us.